CTG-KNX/IP links a EIB-System and a AVIT- or AMX™ control system.

The CTG-KNX/IP links a EIB-System and a AVIT- or AMX™ control system.

To control a EIB-system, data has to be sent in a special protocol. This protocol
is hardware oriented and therefore through software based systems feasible
just with high effort.

The CTGKNX/IP solves this problem! It enables the control system to communicate
with the EIB system. The telegrams of the bus-line are offered to the gateway CTG-KNX/IP over
the EIB. The gateway filters the wished informations and provides it for the connected controller.
The software module CTKNX (delivered with the CTG-KNX/IP) manages all ingoing information,
and passes them on edited to the main program of the Controller. In the opposite direction
this program manages the ingoing data of the main program (e.g. touch panel commands)
and changes them, so that the EIB-Gateway (CTG-KNX/IP) can distribute them as EIB-telegrams 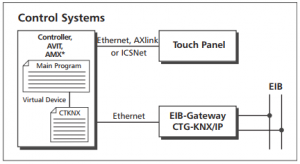 The processing, calculation and analysis of the data between the EIB-gateway and the
controlling system is made by the software module CTKNX, which communicates with the gateway directly
over a TCP/IP (Ethernet) interface.

This software module, which is included in the scope of delivery, supports the simple programming
of the AVIT or the Standard controller.